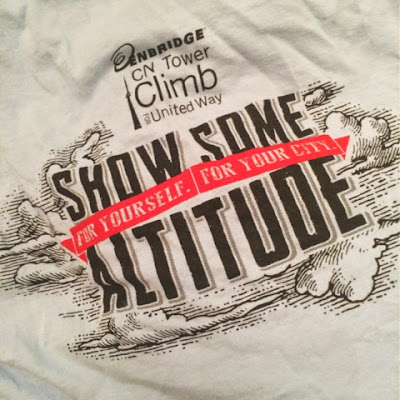 A few days before running the Scotiabank Toronto Waterfront (half!) Marathon, I climbed the stairs of the CN Tower for the second time. Yes, all 1,776 stairs.

I wanted to beat my time from last year, but knowing I had to run just a few days later my main goal was to finish and feel good. So that's what I did. It was disappointing to climb 46 seconds slower than the previous year, but the way I felt when I finished was great. The year before I was weak and shaky and instantly  hated myself for even attempting it. This year was still difficult, but my legs felt good once I reached the top, I was still energized, and I felt like I would want to do the climb again in the future. While not completing a time-goal, I think these feelings showed that I had reached a different realm of growth from the previous year. 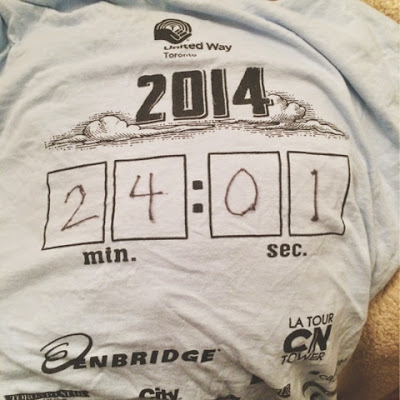 I think I would do it again. For a couple of days I was unsure, but after I ran a half-marathon a few days later (again!) and had a PR despite struggles on the course, I feel confident in my abilities.

I would highly suggest attempting a climbing race. Although running is difficult in itself, climbing is incredibly tough but hugely fulfilling. Fighting against gravity and  your body weight, not just pushing forwards but pushing upwards, and being able to stand beneath the structure and be able to see you were able to accomplish something great is an amazing feeling.

Do you have any other ways of measuring your success besides a PR?

Posted by courtneyrobert at 9:19 AM No comments:

I'm not a huge coffee drinker. Lately I've been starting my day with hot water with lemon, honey, fresh ginger, and echinacea and drinking a tea mid-morning in one of the many flavours I have stocked in my cupboards. Usually these are the only energy boosts that I need. 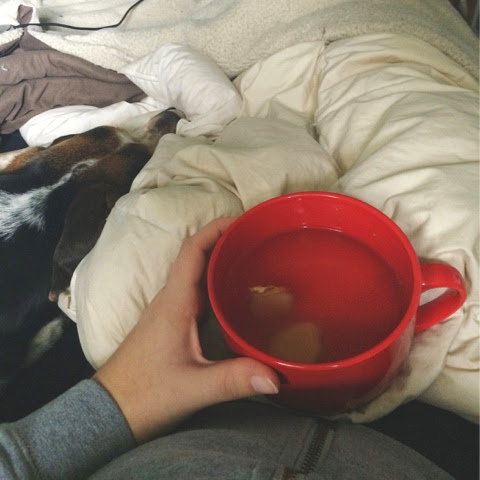 Today was different. I worked an afternoon shift from home last night (5:30-10:30pm) and although as soon as my shift was over I climbed straight into bed, I felt wired and couldn't sleep. Exhausted for work this morning I needed an extra caffeine boost to get me going. Tired of coffee from the train station and not able to hit up a Starbucks on my way home, I got to work making my own latte.
I try to stay away from dairy but I hate soy milk so I was excited to try something new and attempted a latte with almond milk. It was so easy and delicious!
I stuck an espresso disk into my Tassimo and made it with extra water for more volume. While that was brewing I warmed 1.25 cups of almond milk on the stove while whisking often. Then I combined the two and stuck it in a travel cup for my commute. Voila! Lazy/cheap girl latte. I love the taste of almond milk so I really like the nutty taste it gives the latte. 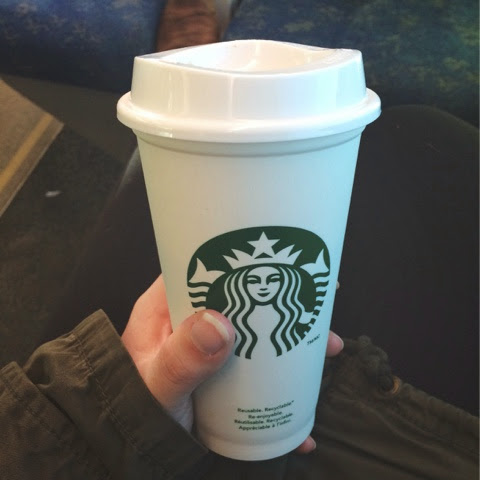 I'd love to invest in a frother one day but for now this method will do.
What's your favourite way to perk up on slow mornings?
Posted by courtneyrobert at 5:52 AM No comments:

Sunday I ran the Scotiabank Toronto Waterfront (Half) Marathon for the second time. I absolutely love this race. The course is mostly smooth with amazing views of the Toronto waterfront and downtown core. I could run this race every year for the rest of my life. 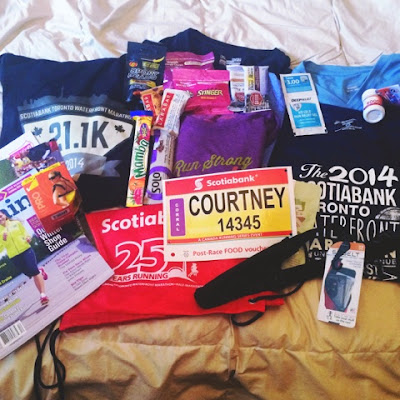 I was a little disappointed and struggled with the race. I achieved a three-minute PR but I knew I could have done better. Although the course is flat, there are slight declines along the way. Awesome, right? Not so much. On the declines I was suffering through knee pain so extreme I debated dropping out. I'm glad I pushed my way through it because on the flat and incline surfaces the pain seemed to disappear. Now, either I'm starting to suffer from IT band issues on my other leg (it mainly occurs on the left leg)... or it has to do with the fact that I got hit by a car the day before.

Somehow I managed to avoid most of the impact of the car by lifting myself onto the hood. I even landed on my feet! I walked around the race expo, took the dogs on a six-kilometer walk, and completed yoga without feeling any pain. Tonight I'm going to the massage therapist and I'll ask if it feels like IT band issues to her.

Surprisingly I didn't end up taking any pictures with my face before, during, or after the race, but I did take a picture of my expo finds and buys, and a picture of my post-race meal. 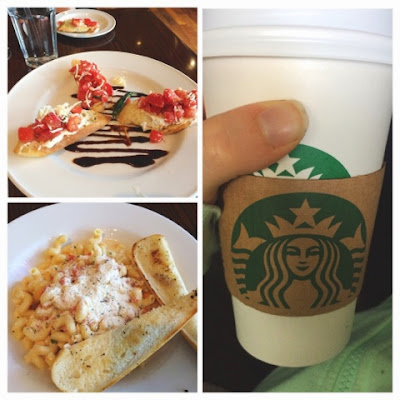 What stupid things have you done before a race?

Posted by courtneyrobert at 5:23 PM No comments:

courtneyrobert
A Communications Professional with a love for baking and vegetarian cooking. You can find me on my yoga mat, or in my running shoes on a local trail. I'm a proud mother to a fur baby.